The IFS at C.U. Boulder is one of few places in the U.S. where the latest digital projection systems and reel-to-reel 35mm film projectors coexist peacefully to both honor the rich legacy of the past, the present, and future.

The International Film Series is Boulder's first arthouse series and has been locally programmed since 1941. Our main venue is Muenzinger Auditorium, located west of Folsom Stadium (400 seats). Our secondary venue is the Visual Arts Complex Auditorium, located north of the Euclid Autopark and downstairs in room 1B20 (200 seats).

We provide ushers at every show and actively discourage texting and other cellphone abuse during screenings. We never show more than three trailers before the film, if any at all. We never show ads. We screen as many films as possible on celluloid and have reel-to-reel projectors operated by experienced professionals, which grants us access to rare and archive prints from all around the world. Unlike most theaters, we do not make money from concessions and prefer to maintain a quiet venue, free from distractions where the focus is always on the film itself.

Most films are $9 general admission, $7 for CU students and senior citizens 55 and older. 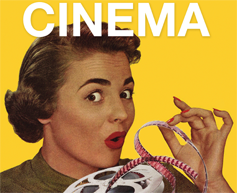 The IFS played a crucial role in building up an audience in Boulder for the works by such directors as Akira Kurosawa, Ingmar Bergman, Federico Fellini, John Cassavetes, and many more. As other theaters took notice of this growing audience they also began to expand their programming and, up through the 1980's, there were many single-screen theaters in town, some of which were also dedicated to art-house cinema. While most of those screens are now defunct, the IFS remains committed to eclectic cinema that is locally programmed. (See our Boulder and IFS history timeline.)

The IFS screens over 100 films a year

Whether debuting a premiere film or screening a restored 35mm print of some classic title that hasn't been on the big screen in decades, the IFS plays host to an eclectic mix of genres and filmmakers with the goal of providing variety and affordable cinema to the Boulder population.

Although the numbers fluctuate dramatically from the heyday of arthouse cinema (back in the 1960's and 1970's), when sold-out shows were common, the IFS has managed to buck the trend that has closed down most calendar film programs across the nation. For the last five years, yearly IFS attendance has hovered steadily with around 20,000 admissions.

One of the keys to our success has been the small but dedicated staff that keep the program running. The IFS is proud to put on a show that rubs shoulders with programs from big cities that do the same thing with a much bigger staff and more resources. We're a lean and scrappy group that genuinely cares about cinema as a shared and affordable experience for our community. Pablo Kjolseth has been watching films at the IFS since 1980 and has been programming it since 1997.

We bring award-winning filmmakers to campus

Whether it's acclaimed documentary filmmaker Albert Maysles (Gimme Shelter, Grey Gardens), or German maverick director Werner Herzog (Aguirre: The Wrath of God, Grizzly Man), the IFS has provided a venue and publicity for these distinguished guests and their award-winning films.

The IFS regularly collaborates with other film festivals and provides the campus and Boulder community with access to satellite screenings. The IFS has worked together with the Denver International Film Festival, the Boulder International Film Festival, and many other organizations. It was recently selected by Sundance Institute as of only 14 art-house venues in the nation to participate in the Art House Project.

Please contact us to suggest a title, ask about a film, offer a compliment, make a complaint, or to comment on our web site.