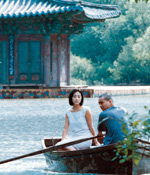 Kim Ki-duk, known here for the symbolic-fishhook stomach-flipper THE ISLE, grabs this ironic disconnect with both hands in SPRING, SUMMER, FALL, WINTER . . . AND SPRING, and ends up with a meta-Buddhist fable, entirely concerned with the quotidian of work and human vice, and in total thrall to the philosophy's poetic juxtapositions. All the same, this utterly lovely film hard-sells an audiovisual ideal of meditational tranquility that could produce some converts as well as tourists to Kyungsang; the hackles of the devout might also stiffen once they learn that Kim invented most of the rituals and totems himself. (He was, he says, raised as a Christian.) Like THE ISLE, the film focuses entirely on a shelter floating on a lake—in this case, a hermitage on man-made Jusan Pond, surrounded by lush woodland. The shrine is inhabited by a wizened monk (Oh Young-soo) and his grade-school-age protégé (Kim Jong-ho); with each of the five seasonal chapters, anywhere between 10 to 15 years pass. The arc belongs to the boy (embodied in the last, grown-up chapters by the director himself), for whom everything turns out to be a koan-esque metaphor for human folly and life's resulting tribulations. After the tyke impishly tortures small forest creatures by tying stones to them, his mentor ties a rock to the boy's torso, a physical trial that recurs and, as in DOGVILLE's penultimate affront, suggests both self-destructive burden and entrapment. As the years pass, the ordeals escalate, but neither the old man nor the filmmaker passes judgment. (Michael Atkinson, The Village Voice)