A fun film from Lars Von Trier and Jørgen Leth. 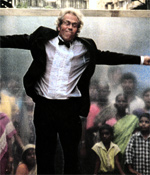 Von Trier's playful side comes through in The Five Obstructions, a cinematic game in documentary form. Von Trier calls up Jørgen Leth, a one-time '60s avant-garde firebrand, and invites him to remake his 1967 short "The Perfect Human." Von Trier orders Leth to remake "The Perfect Human" five times, each time following a set of rules that von Trier concocts pretty much at random. The first film has to be shot on location in Cuba, with no shot held for more than 12 frames; the second has to be shot in one of the most miserable places on Earth, but the misery must be kept offscreen; and so forth. Each new rule is punctuated with a big boom on the soundtrack and the edict popping up on screen: "12 Frames!" Source: Noel Murray, The Onion