A Piece of Sky

Women in prison and in factories 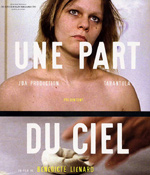 “Une part du ciel” (A Piece of Sky) tells of the resistance of women prisoners and women workers in a factory. In prison, Joanna obstinately questions the authority that confines her. Bound to a production line, Claudine is caught up by a past that links her to Joanna. Joanna’s lawyer asks her to testify to explain what pushed her friend to use violence but doing so would mean denouncing the union which seems to protect her. Comings and goings between the prison and the factory, between intimacy and politics. Joanna yields, breaks down and then finds the strength to declare once and for all the right to dignity for herself and the women surrounding her. Claudine rebels. She agrees to testify, leads the factory struggle and joins in Joanna’s radicalism. She refuses the compromise offered by the union structure and agrees to bear her exclusion. The 2 women reveal themselves in the valor of their refusals and give their friendship a possible rebirth. United by a mutual past as unionists, Claudine and Joanna (the fascinating Séverine Caneele, discovered in “L’Humanité” / Humanity) have no longer met since Joanna was imprisoned. Her former comrade’s testimony might be the last chance to save her. In her first film, Bénédicté Liénard avoids the pitfalls of a social film, yet convincingly faces the condition of women in prison and in factories. With a scenario that cleverly plays on the unsaid, the portraits of women have a rare accuracy. A test run of promising sobriety and maturity. X. L. – Le Nouvel Observateur – October, 2002

A Piece of Sky