A dark comedy from the Sundance Film Festival 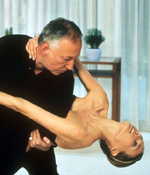 At 50, Jean-Louis Broustal is a TV producer with everything. A career marked by success, a divine wife and money as if the skies had opened up. Besides, his latest program, "Envoyez les mouchoirs" (Send in the Handkerchiefs), with the famous MC, Philippe Letzger, has broken all the audience rating records. Bastien, who warms up the audience for this dubious program, knows he is worth more than this. If he lets himself be humiliated by Letzger within "Broustal Productions", it is simply to have the chance of being close to Jean-Louis Broustal…his idol. "Mon Idole", a fable about the disenchanted world where admiration can become dangerous, reveals its own tone, style and universe. Source: François-Guillaume Lorrain, Le Point, December, 2002.