17 portraits of a young woman trying to rebuild her life 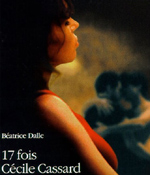 In the depths of Brittany, a young woman suddenly becomes a widow. Stunned, the lonely beauty rebuilds her life, step by step, and becomes reconciled with her ghosts. Along her highly contrasted route, dotted with hardships and encounters, wanderings and shifts of mood, she accepts a handful of radical decisions: temporarily giving up her son, moving to Toulouse, etc. The film moves subtly from tragedy to quiet hope. At its center, Béatrice Dalle, a living poem, devours the screen. Noticed at Cannes, the first film by the novelist Christophe Honoré offers a powerful atmosphere, superb images, a dynamic soundtrack. Source: Alexis Campion, Le Journal du Dimanche, July, 2002.