Lyrical and enthralling film about memory. 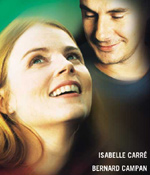 For Zabou Breitman, memory is a passion that she shares with us through simple characters. Claire (the rigorous and sensitive Isabelle Carré) is a young woman with a problem-free existence, yet she has lost the thread of her own life. One stormy day, a bolt of lightning wiped out her memory. Still a bit feverish, she enters a center for all kinds of forgetful people, a huge house where they move around by following colored lines, so as not to lose the thread. The story centers on a strong, contrasted character, Philippe (Bernard Campan), a young man completely anesthetized by a car accident. Claire brings him out of his torpor. The more Philippe regains his memory, the more it hurts him, while Claire loses her memory and becomes insensitive. Zabou adroitly uses these slipped gears that short-circuit sentimentality and refine it by stating that we do not love with words nor with sentiments but with memory. Source: Frédéric Strauss, Télérama, January, 2002.