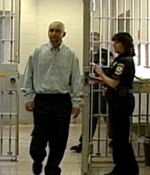 In January 2002, Illinois' Republican Gov. George Ryan dramatically reversed himself and commuted the death sentence of 167 people waiting to be executed. How and why he came to that decision is the compelling and important story told by Katy Chevigny and Kirsten Johnson's documentary "Deadline." The film is an example of social activism at its best; it's not only enlightening, but it's an engrossing story that a smart audience should embrace. Source: James Greenberg, Hollywood Reporter.