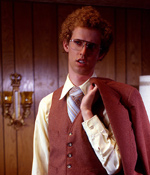 Napoleon Dynamite is a very funny sketch of high school nerds in rural Idaho. Its deadpan performances and cinematic sense of humor earn it a strong recommendation. Napoleon is probably one of the biggest losers at school, with his frizzed hair, half-closed eyes, steel-rimmed oversized glasses, and a lanky frame that he doesn't quite know how to inhabit. But in his vivid fantasies he's probably the coolest boy in school. He's surrounded by supporting nerds, each with their own unfortunate hairstyles and foibles. Hess has discovered a truism about comedy filmmaking: flat, stagey, symmetrical scenes that show the whole body are inherently funny. Source: Marty Mapes, Movie Habit.