A dark feminist comedy from Iceland 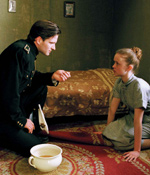 Writer-director Agust Gudmundsson skillfully balances romantic comedy and melodrama with a coming-of-age story and morality play. Set in the mid-1950s in a small fishing village outside Reykjavik, the story centers on the homecoming of Freya, who immigrated to America with her U.S. serviceman husband after World War II, but is returning a widow. Freya moves in with a houseful of female relatives, the key one being 11 year-old Agga. A glum girl, she suspects something nasty about Freya the moment they meet. Agga is convinced Freya is responsible for several local deaths and reports her suspicions to the handsome police captain, who might just believe her if he wasn't so smitten with Freya himself. Solid acting anchors "Laughter," but it's Freya and Agga who carry the load. As sultry visions of feminism past and future, they represent angry goddesses who aren't going to take it anymore. Source: John Petrakis, Chicago Tribune.