The making of the film that launched "blaxploitation" 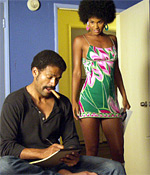 The 1971 film Sweet Sweetback's Baadasssss Song by Melvin Van Peebles launched the "blaxploitation" movement in American cinema. Baadassssss! -- directed by Melvin's son Mario Van Peebles, who plays his father -- retells the making of that film. Further blurring the line between homage and referent are Khleo Thomas (Holes) playing young Mario and interviews with the actual 1971 figures over the end credits. There's also a hallucinatory spirit of Sweetback, the character in the 1971 film (played by Mario in costume), who gives encouragement to Melvin. Seeing Mario Van Peebles playing his father yelling at an actor playing his younger self is a little mind-warping, but Baadasssss is engaging and fun. Source: Marty Mapes, Movie Habit