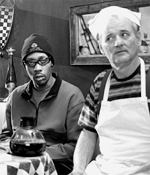 The short Coffee and Cigarettes opens with (the movie consist of a dozen short films) was shot in 1986, when Saturday Night Live asked Jarmusch for a contribution. He gave them Strange to Meet You, a bit of oddball nonsense in which comedian Steven Wright and actor/director Roberto Benigni meet in a coffeeshop. There is a refreshing rough-and-tumble energy to the films. Everyone's having smart, creative fun, the actors confident enough to poke fun at themselves and Jarmusch exploring the negative spaces of other stories. The best pieces are downright delicious. Musicians Tom Waits and Iggy Pop just about steal the movie. Cate Blanchett is a close runner-up in "Cousins," a one-woman, two-character soap opera that's both funny and poignant; she portrays both glamorous movie star Cate and her slouchy, punky cousin Shelly. Sometimes it's profound, sometimes it's silly, but it's always entertaining. Source: MaryAnn Johanson, The Flick Filosopher