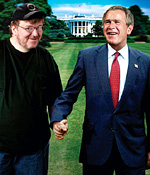 At its best, the film is a powerful, furious, loving -- and, at times, manipulative -- treatise on family values. The families Moore values are those of Americans like Lila Lipscomb. The Michigan mother, whose soldier son was killed in Iraq, is one of Moore's best witnesses because she is a complex American. Moore is a provocateur, a blowhard, an entertainer. But he is also a patriot. As a director he has consistently advocated not merely for the rights of a citizen, but perhaps one of the chief and founding obligations of being a citizen: to make government accountable to its people. "Fahrenheit 9/11" demands something from us. It is almost the opposite of the reason we buy the ticket, grab the popcorn and give ourselves over to the spectacle at the multiplex. It demands that we interrogate our response to what the movie is making us feel. Moore's film, like the very media it so rightly castigates, demands that we look beyond its ready answers. Source: Lisa Kennedy, The Denver Post.