Will wipe the smile off your happy meal 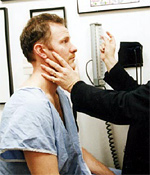 For 30 days straight, the New York filmmaker was his own guinea pig (emphasis on the pig), eating only McDonald’s meals for breakfast, lunch and dinner. With camera in one hand and a Big Mac in the other, Spurlock documented his dieting debacle. The result is Super Size Me, which might even give Ronald McDonald indigestion. (Tom Delapa, Boulder Weekly)