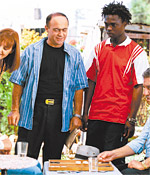 A young Zulu, devoutly Christian and the pride of his South African village, makes a pilgrimage to the Holy Land—with tragicomic results. James' Journey to Jerusalem, the first dramatic feature by 34-year-old Israeli director Ra'anan Alexandrowicz, is a deceptively modest fable of innocence abroad that resonates with the situation within Israel and without. Despite James's protests that he's on a pilgrimage, he winds up in a sort of international holding pen. James is then selected by Shimi the contractor (Arab actor Salim Daw) and taken through the cruddy backstreets of Tel Aviv to the hostel where Shimi warehouses his exploited employees. Alexandrowicz uses James's education to criticize a society that has long since lost its communitarian spirit and socialist ethos. Source: J. Hoberman, The Village Voice.