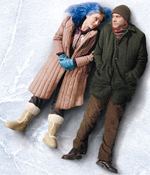 There is so much cool talent involved in Eternal Sunshine of the Spotless Mind that it's hard to know where to start. Charlie Kaufman (Being John Malkovich, Adaptation) is proving to be the most influential screenwriter of his generation. And if anyone can out-Spike Jonze director Spike Jonze, it's Michel Gondry, who worked with him in the late '90s. Mix in two of the biggest actors of the last half-decade (Jim Carrey and Kate Winslet) and you have one heck of a movie. The bulk of Eternal Sunshine takes place inside the mind of Joel (Carrey) during his mind-erasing, a newfangled sort of elective surgery. This subjective landscape gives Kaufman and Gondry free rein to play with surreal images and notions. But at its core, Eternal Sunshine of the Spotless Mind is a romance. Amazingly, Kaufman is able to bring this sad, chaotic mindstorm to a succinct close. With a single word, "Okay," Kaufman writes the perfect ending. It is a simple, sweet affirmation that I didn't know Kaufman capable of. Source: Marty Mapes, Movie Habit.