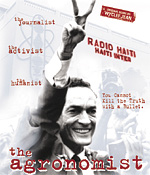 Jonathan Demme's now-inspiring, now-shattering The Agronomist is another portrait of a doomed storyteller embellished with subtle audio cues and almost mnemonic camera movements -- the stamps of a gifted filmmaker who may never be better than when he works with the stuff of real life. For The Agronomist, Demme's portrait of an outspoken Haitian journalist, Jean Dominique, forced by the historically unstable Haitian government into multiple stints in exile (Demme interviewed him between fifteen and twenty times during one such period in 1993-94), the director's unusual empathy for the oppressed and the colourful finds a keen, vibrant, moving vehicle that is career-defining. Herein, Demme manages the near-impossible: a current, important biography that is unapologetically political without sacrificing artistry, and unapologetically sentimental without sacrificing backbone. It's capable of renewing convictions, strengthening resolve, and inspiring a defensiveness for the causes of freedom from persecution, freedom of the press, and freedom to hope that one person, convicted and articulate, can still make a difference. Source: Walter Chaw, Film Freak Central.