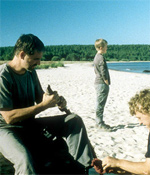 Fables and fairy tales (ones that haven't been Disneyfied) are often very dark and dreamlike. The universe runs on strange rules that are often capricious and dangerous. Our protagonist Ivan (Ivan Dobronravov) is a petulant child of 10 who is magnetically drawn to his older brother's (Vladimir Garin) circle of friends. Standing in for capricious universal rules is father (Konstantin Lavronenko), who had left them years ago, and who mysteriously returns one morning. The cinematography by Mikhail Kritchman is outstanding; it is beautiful, evocative, and meaningful. The Return transcends plot and emotion and aims for a part of the human mind that's still developing when we are children. It's a part of us that's deeper than emotion or action, or even reason. Source: Marty Mapes, Movie Habit.