Dreamy, disturbing Italian film of childhood innocence and the savage universe of adults 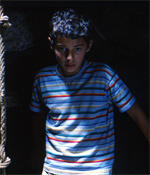 An Italian version of Charles Laughton's Night of the Hunter in many respects, I'm Not Scared (Io Non Ho Paura) is admirable in is its ability to evoke the dreamy disconnection of childhood -- the startling realization at some point along the way that your parents may not be merely flawed, but occasionally malicious. A young boy, Michele (Giuseppe Cristiano), finds a child imprisoned in a hole next to an abandoned house in the middle of an impossibly beautiful fall Tuscan landscape, all yellow wheat and verdant hillock. Shots of wildlife--owls and toads, snakes and chickens--evoke Laughton's film, while ants crawling on eyes and animals killed by automobiles suggests the intrusions of the things of man into the things of the wilderness. A quiet picture, I'm Not Scared is ultimately hopeful as well, finding in its young protagonist the innocence of childhood and the boundless courage it requires to become a man in a savage universe. Source: Walter Chaw, Film Freak Central.