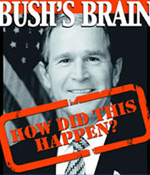 The best moment in "Bush's Brain" comes in the film's first five minutes. Here we see George W. Bush, failed oilman, losing congressional candidate, owner of one of baseballs' most pathetic franchises, and ridiculed governor, stepping off Air Force One as President of the United States. How, the film asks, did this happen? It's a question that this scathing portrait of W's senior political adviser Karl Rove answers completely. For if our president really does have a brain, it clearly resides in this scary man's head. Bush's Brain explores the remarkable rise of this shrewd political hack from his days as an overeager young college Republican through his rise in Texas politics and on to the West Wing office once occupied by Hillary Clinton. Directors Michael Paradies Shoob and Joseph Mealey chronicle Rove's laundry list of dirty tricks in this film. The most compelling arguments come from those vanquished victims from both sides of the aisle who got in Rove's way. Here we see in action how for Rove, who declined an invitation to appear in the film, the ends always justify the means. Source: Merle Bertrand, Film Threat.