Takeshi Kitano is back as The Blind Swordsman! 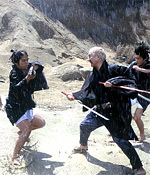 Director Kitano plays the swordsman Zatoichi, ostensibly a blind masseur, who ends up holed up with a woman who’s being squeezed by local gangsters. The action sequences are surprisingly sparse -- Kitano plays them for atmosphere, which makes the inevitable bursts of actual violence come across with the abruptness of gunshots. Fortunately, Zatoichi doesn’t live and die by the sword alone. It’s at base level a gorgeous and evocative piece of entertainment that takes a deliberately playful approach to its genre. At the climax of the film, Kitano stages a mammoth musical number (!) that makes breathtakingly explicit the longstanding connections between martial arts pictures and movie musicals. It's a big gamble that's bound to turn off as many viewers as it charms; me, I found it simultaneously jaw-dropping and invigorating, a brazen and slap-happy bid for sui generis status. Source: Bryant Frazer, Deep Focus.