Love Me If You Dare

In the vein of Amélie 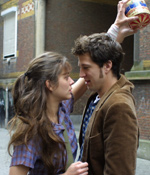 A smash hit in its native France, "Love Me If You Dare" is a precariously bold, dark but light-hearted comedy about a boy and a girl who grow up together challenging each other to more and more outrageous -- and sometimes even dangerous -- dares. It's a game they play throughout their lives, much to the frustration and chagrin of parents, teachers, co-workers, lovers, spouses, and increasingly, each other. But it's a game so ingrained in the personalities of intellectual Julien (Guillaume Canet) and precocious Sophie (Marion Cotillard) that neither one is willing to back down and admit what's really going on -- namely that they're in love. The game makes them feel more alive, and Canet and Cotillard capture the fleeting capriciousness that feeds their souls with an oddly unnerving charm. Samuell also has in store such a novel, unorthodox finale that no matter what your reaction to Julien and Sophie's sometimes amusing, sometimes deeply troublesome pastime, you can virtually imagine their story turning out however you like. Source: Rob Blackwelder, SPLICEDwire

Love Me If You Dare