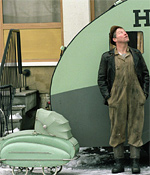 The culinary habits of single men in postwar Norway may not be high on the list of hot topics right now, but the droll, deadpan Kitchen Stories is, defiantly, irreverently, all about that. And it's hilarious - in a Scandinavian Sartre-esque sort of way. Kitchen Stories is matter-of-fact absurdism, with way-cool '50s design elements to boot. Directed by Bent Hamer, Kitchen Stories features Folke, a clipboard-and-stopwatch-toting envoy of Sweden's Home Research Institute, dispatched to the Nordic hinterlands to monitor the reluctant volunteer Isak (Joachim Calmeyer) as he brews coffee, tamps tobacco, cooks eggs. The deal is this: Under no circumstances is Folke allowed to communicate with Isak, nor is the researcher permitted to participate in any of the kitchen activities. Of course, rules are made to be broken, and the relationship that develops between Folke and Isak is the nub of the tale. A whimsical allegory about isolation, community, "scientific" research, and the odd things Norwegians put on their bread, Kitchen Stories is a thoroughly charming oddity. And, in the end, a moving one, too. Source: Steven Rea, Philadelphia Inquirer.