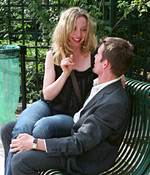 Ten years ago, Richard Linklater told a romantic little story about a whirlwind relationship between an American boy and a French girl in Vienna. Jesse (Hawke) opens this new movie on tour, promoting his first book. In the tiny crowd of readers is Celine (Delpy), whom he has not seen since the first movie. It's Jesse's last night in Europe before flying home, but he has 80 minutes to spare for Celine (Before Sunset takes place in real time). The couple talk as they wander from the back streets of Paris. Like the first movie, Before Sunset is all about the dialogue. Think My Dinner with Andre, but with better looking stars in a more photogenic surrounding. Before Sunset is a very good movie. It's a must-see if you've seen Before Sunrise, and even if you haven't, it's a joy to watch. The sheer novelty of watching a movie that hangs together for 80 minutes, and not just 3 minutes at a time, is a breath of fresh air. Source: Marty Mapes, Movie Habit.