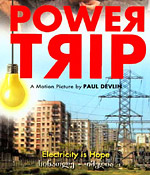 When the power goes out in the Republic of Georgia, it is more than a power outage. It is a sign of that country's tenuous relationship with the modern world. Soon after declaring its independence in 1991, Georgia was overwhelmed by corruption and civil war. In 1998, American-based multinational AES, "The Global Power Company," won the bid to privatize Telasi, the electricity distribution company of Tbilisi. "Power Trip" is the story of their failed attempt to keep the lights on in Georgia. Piers Lewis, project director of AES-Telasi, is presented as a visionary eccentric who vows not to cut his hair until succeeding in getting 50 percent of AES-Telasi customers to pay their bills. Despite shortcomings as objective reporting, Power Trip offers a glimpse into a sputtering culture that, after decades of communist rule, has little chance of survival in the modern world. Source: Bill White, Seattle Post-Intelligencer.