The Saddest Music in the World

The funniest surreal moments on film since Being John Malkovich 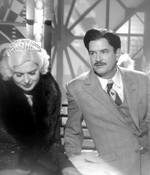 The Saddest Music in the World is a grainy, black-and-white movie that wishes it were a 1940's melodrama in a surreal alternate universe. It's also one of the funniest movies you’ll see this year. A Canadian beer baroness, Lady Port-Huntley (Isabella Rossellini), holds a contest to find the saddest music in the world. Three Canadian men from the same family vie for the title. The youngest son is Chester Kent (Mark McKinney), who lives in New York as a sleazy producer. And while he doesn’t have any talent himself, he knows how to buy it and play to a crowd. His crass, maudlin, big-production numbers are designed to wow the crowd and sway the judge. Maddin's movies show an appreciation of the art of melodrama; a claustrophobic screen; and in the case of The Saddest Music in the World, some of the funniest surreal moments on film since Being John Malkovich. Source: Marty Mapes, Movie Habit.

The Saddest Music in the World