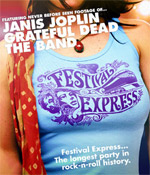 Canada's 1970 Festival Express tour was headlined by Janis Joplin, the Grateful Dead and the Band. The movie documents the musicians' weeklong train journey across Canada, a sort of rolling Woodstock with rolling thunder. From director Bob Smeaton (The Beatles Anthology), Festival Express sheds new light on psychedelic rock and shows viewers heretofore unseen, career-defining performances by some legends. This treasure is compiled from film unearthed in the London garage of the producer's son decades after it was tucked away during a battle over money. Besides the headliners, performers included bluesman Buddy Guy, country rockers the Flying Burrito Brothers (without Gram Parsons) and the New Riders of the Purple Sage, folk singers Ian & Sylvia, rockers Delaney and Bonnie and Woodstock veterans Sha Na Na. "The real music was on the train," recalled Mickey Hart. "To perform on stage is one thing, but to really jam is another. We were up 24/7, and the music never stopped." Source: Brad Kava, San Jose Mercury News.