Written by the late Krzysztof Kieslowski 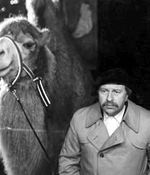 One day a camel appears in a Polish village. It must have been left behind by a circus. Bereft and abandoned, it seeks out the garden of the Sawicki family, Zygmunt and Marysia, and they are happy to give it a home. "The Big Animal" is a fable written by Krzysztof Kieslowski, the Polish poet of serendipity and coincidence, who died in 1996. He wrote this screenplay in 1973, adapted from a novel. Now it has been filmed by his best friend Jerzy Stuhr, who stars as Zygmunt and appeared in many Kieslowski films, including "White." Kieslowski finds unexpected connections between characters, and unexpected meetings, and unintended consequences. Surely to acquire an orphaned camel is such an event. It is the kind of story that could be seen as a satirical attack on the government, or on the other hand, it might simply be the tale of a camel. You never know. It is whimsical, bittersweet, wise in a minor key. Source: Roger Ebert, Chicago Sun-Times