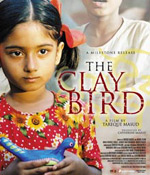 Family divisions reflect a cultural clash between moderate and extremist views in this humanist drama, set in the buildup to the brutal 1971 civil war from which East Pakistan emerged as Bangladesh. When his zealot father discovers that he has attended Hindu festivities with his liberal intellectual uncle, young Anu (Nurul Islam Bablu) is sent to a strict madrassa school. Anu returns to his village when the Pakistani military begins a crackdown on the Bangladeshi freedom movement—the family's house is destroyed and they must flee the region to stay alive. Acclaimed at Cannes, The Clay Bird was first banned by the Dhaka government for "religiously sensitive" material, and released in Bangladesh only after cuts had been made. But the film's critique of Islam is offered without rancor, and it's evident that Masud loves all his characters, whatever their viewpoints. Like Satyajit Ray, Masud makes excellent use of Bengali folk music, and throughout, The Clay Bird recalls the empathy for childhood's innocence and lust for living--as well as the visual rapture and naturalness-of Ray's great Pather Panchali. Source: Elliott Stein, The Village Voice.