A darkly funny feast of sexual and office politics 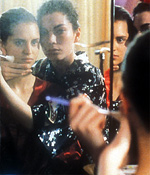 Jean-Claude Brisseau directs the hot and pointed Secret Things (Choses secrètes). Repressed Sandrine (Sabrina Seyvecou (this film's "Joe")) is a barkeep at a strip club harbouring a secret sexual/non-sexual crush on serpentine star Nathalie (Coralie Revel (this film's "Vicky") who stands up for Sandrine's virtue one night and lands both of them on the dole. Determined to help Sandrine divorce herself from the sticky moral and societal complications of female promiscuity, Nathalie becomes the instrument for both of them to infiltrate a male-dominated financial corporation, targeting the most professionally-advantageous sexual conquests. Deadly accurate performances make Sandrine's transformation from bookish to kittenish to ferocious--and Nathalie's devolution exactly in the reverse--convincing, while Brisseau's decision to block out the picture in broad, obvious allegory in billboard pronouncements combine in a piece that challenges without being difficult and explains itself without being condescending. Source: Walter Chaw, Film Freak Central.