Cowards Bend the Knee preceded by the Quay Brothers short: The Phantom Museum

Short films by Guy Maddin and the Brothers Quay 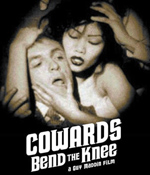 THE PHANTOM MUSEUM: Random forays into one of the world's most extraordinary museum collections: Sir Henry Wellcome's unigue trove of medical curiousities. With their cutomary dexterity and affinity for the arcane, the Brothers Quay (STREET OF CROCODILES) imaginatively document this unique assemblage and bring it hauntingly to life. COWARDS BEND THE KNEE: However self-deprecating director Guy Maddin may seem, we are not encouraged to look at the alternately lurid and hilarious "autobiographical" proceedings with even a smidgen of derision—the often wacky plot is recounted with total earnestness. Combining earnestness and deadpan humor with seemingly effortless flair is definitely one of Maddin achievements. This is, after all, a film that features a heroic hockey player’s hand transplants, a beautiful vixen’s psychotic jealousy, and a beauty parlor that also plays host to a combination brothel and abortion clinic. While it would be an understatement to describe this series of events as implausible, Maddin’s cinematic craft is as fanatically controlled and meticulous as his narrative is ludicrous. Source: Richard Porton, Film Journal International.

Cowards Bend the Knee preceded by the Quay Brothers short: The Phantom Museum