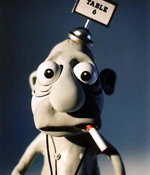 Nibbles, 5 min. -- A father takes his sons fishing in the forests of Canada ...with a few stops along the way.

Harvie Krumpet, 22 min. -- Harvie Krumpet is an ordinary man whose lifelong string of bad luck is offset by occasional episodes of joy.

Squash, 27 min. -- Alexandre's boss belittles him as they play squash, and then challenges him to either win the game or lose his job.

(A) Torsion, 14:30 min. -- The members of a choir in Sarajevo are awaiting safe passage through a tunnel when a farmer begs them to help his injured cow.

La Milpa, 27 min. -- Angela reminisces over her youth during the Mexican Revolution, a time when myths, sensuality, war and pain were everyday occurrences."