Director of Buffalo 66 absorbs the mundane 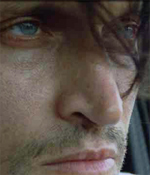 Roger Ebert finally combusted at last May's Cannes Film Festival when he threw stones at the glass arthouse that is Vincent Gallo's The Brown Bunny; you'll note, however, that he never did mount a convincing case against it. The picture is like the plastic-bag scene in American Beauty minus the disingenuousness--there it's just foreplay, after all, but Gallo, his cobalt eyes frozen in gawk, is truly receptive to the mundane; his awe is infectious. Bud Clay (Gallo) is on his way to a motorcycle race in California, a trip that brings him closer to the memory of a lost love (Chloe Sevigny), and their foreordained reunion--which, yes, includes graphic fellatio--is the essence of a man in a quiet room with his pain. If such wounded passages fail to resonate with Ebert, I can only envy his charmed life. Source: Bill Chambers, Film Freak Central.