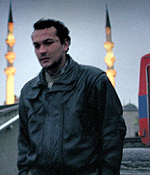 Superlatives are entirely warranted for the immensely assured Turkish arthouse drama Uzak, which is filled with a palpable sense of loss and yearning. Written, produced, photographed, edited, and directed by Nuri Bilge Ceylan, it's the story of Yusuf (Emin Toprak), an unemployed young man from the countryside who comes to a wintry, present-day Istanbul in search of work on the ships. He stays in the apartment of his divorced cousin Mahmut (Muzaffer Özdemir), a successful yet cynical photographer, who's soon irritated at having his solitary routine disrupted by the presence of his rural relative. Few recent films have been so accomplished in capturing the way people drift through their lives, unable to communicate their emotions and feelings. That the actor Emin Toprak died in a car crash after filming was completed only deepens Uzak's memorably melancholic mood. Source: Tom Dawson, BBC.