Taiwanese film explores roots of our love for the cinema 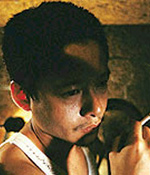 A screen's-eye view of the last audience at a moldering movie palace, these adventures of the cinephile, captured in their meandering, hopeful, voyeuristic glory by Taiwanese director Tsai Ming-Liang, unfold at the pace of wordless observation. By turns funny and melancholy, there is about the picture a feeling of irrecoverable loss. What's lost is more than just time for the watchers, it's true experience. Good bye, Dragon Inn is a chronicle of the way in which memories are made and the act of love at the heart of the consumptive act of cinema. Almost avant-garde in its approach, Tsai is unapologetic in his vision: static long-shots and extended takes rule the day. It's a trance and a chant, a ritual of filmmaking that evokes the ritual of film-watching--and one of the most unique, perceptive pictures concerning why we love the movies since Fellini's 8 1/2. Source: Walter Chaw, Film Freak Central.