A cinematic daydream by the director Pen-ek Ratanaruang 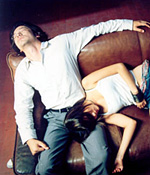 Last Life in the Unvierse falls into the Moody Asia subgenre that’s gained some art-house currency recently. It’s one of those weirdly pitched oddities--it reminds me a little of a Wong Kar-Wai movie, a little of Takeshi Kitano--that employs brief outbursts of violence as catalysts of and punctuation for the inaction of its primary characters, who spend most of the movie moping around a dark house at the seaside. Noi is a Thai woman biding her time before taking a trip to Osaka. Kenji is a lonely, suicide-obsessed neat freak who comes to wish he was going with her. She’s mourning the death of her sister and best friend, and he’s hiding out from people who want to hurt him. With ace D.P. Christopher Doyle behind the lens, it all coheres somehow, with moments of spontaneous, suck-your-breath-in beauty emerging from the relatively minimalist narrative. Pen-Ek reveals himself here to be an assured director with a welcome sense of humor and adventurousness. Source: Bryant Frazer, Deep Focus.