Metallica: Some Kind of Monster

A journey into the band's psychic inferno 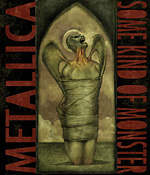 Here's a rock doc like no other: a window into the making of the Metallica album St. Anger that becomes a journey into the band's psychic inferno. Filmmakers Berlinger and Sinofsky thought it would be intriguing to film the process of making St. Anger after the departure of bassist Jason Newsted. Nearly three years and 1,600 hours of footage later, they emerged with a portrait of a dysfunctional band in crisis. Frontman James Hetfield hits rehab to fight his addictions (Metallica were dubbed "Alcoholica" in the 1980s) and feuds with Napster-hating drummer Lars Ulrich, as guitarist Kirk Hammett tries to play peacemaker. That's when therapist and performance-enhancement coach Phil Towle is brought in. Everything but blood is spilled in the process. It's one for the time capsule. Source: Peter Travers, Rolling Stone.

Metallica: Some Kind of Monster