From the director of The Man on the Train 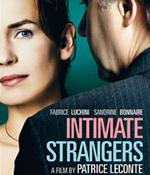 Fabrice Luchini plays William Faber, a mildly repressed tax accountant with a quiet, well-ordered life; Sandrine Bonnaire plays Anna, a troubled woman who is seeking psychiatric help for a marriage that is going on the rocks. As it turns out, Anna misunderstands some directions and opens the door to William’s office, thinking it’s the office of her psychiatrist. Before William can correct her mistake, Anna is pouring out all her most intimate secrets. William is so fascinated by her revelations that he decides to continue his role as an analyst just so that he can hear more. She soon discovers her error when she calls the real Dr. Monnier, yet nothing changes in Anna’s relationship with William: She enjoys the intensity with which he listens to her innermost secrets. For his part, William begins consulting Dr. Monnier about his own infatuation with Anna and his peculiar role as her confidante. Source: Andrew Sarris, The New York Observer.