Indie thriller about being left alone at sea 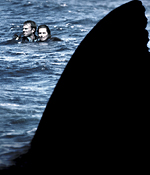 Open Water has been compared to both Jaws and The Blair Witch Project. A couple, Susan (Blanchard Ryan) and Daniel (Daniel Travis), headed to a tropical island for a vacation. Once there, they embark upon a scuba diving excursion, and that's where the problems begin. They are accidentally left behind while under water. When they surface, they find themselves all alone in the middle of the deep blue sea. At its best, Open Water is suspenseful and frightening - there are several excellent "boo!" moments, and Kentis never cuts away to relieve the tension. The film's best scene occurs after dark, during a thunderstorm. It's a chilling, unsettling five minutes, and, even if nothing else in Open Water had worked, this sequence alone would make the film worth consideration of a recommendation. Source: James Berardinelli.