An Audience Award winner at Sundance 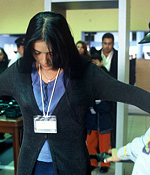 Maria Full of Grace is a competent, convincing, and emotional movie about a girl who becomes a mule in the Colombian drug trade. Her mother, her sister, and her niece all rely on her to bring some money into the household. A friend introduces her to a man who hires mules. "How's your system?" he asks bluntly. If she accepts the job, Maria will have to swallow large rubber pellets full of cocaine and fly to the United States. The scene you will remember forever has Maria swallowing 62 of these things, each about the size of half a roll of nickels. The travel sequence is one of the tensest in any movie you're likely to see this year. It's more subtle than something like The Bourne Supremacy, but every bit as effective on an audience. Source: Marty Mapes, Movie Habit.