From the director of Latcho Drom and Gadjo Dilo 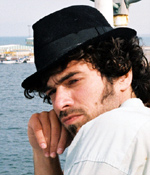 French-Algerian and part Rom (Gypsy) director Tony Gatlif has created such SDIFF audience favorites as Latcho Drom and Gadjo Dilo. Exiles, his 14th film, is characteristic of his prior work in featuring a marvelous musical score created by Gatlif and collaborator Delphine Mantoulet, but less so because Rom culture makes only a fleeting appearance. The central characters here are Zano, a young man whose parents were French colonials in Algeria expelled when the country gained its independence after a bloody revolution, and Naima, the daughter of Algerian Arab immigrants to France. Though neither of the two young lovers knows much about Algeria, nor speaks Arabic, they impulsively decide to look for their roots. On what turns into a road trip with all the fun and adventure of a Hollywood teen comedy, they run into Leila and Habib. Heading for Europe, this Algerian couple gives them a letter of introduction to Leila's brother, Said. After some unexpected detours and more wild adventures, the pair reaches Algeria. When they find Said, they begin to explore Algeria. They succeed in making a spiritual connection to the roots they've come to seek, particularly in a finale featuring a Sufi ritual. Exiles pulls us in on several levels--as pure entertainment, as character study and as a fascinating journey into an ancient culture.