Hong Kong action at its best in years 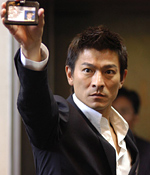 This gritty police thriller is a gargantuan hit in Hong Kong. Leading a high-powered cast is Tony Leung (Cannes best actor for "In the Mood for Love"). He plays Yan, a veteran cop who has spent a decade undercover, infiltrating crime syndicates. Perennial Hong Kong fave Andy Lau is Ming, a young Triad planted into the police force in his teens by crime boss Sam (Eric Tsang). Both men have grown weary with their personal hells (the film's Chinese title, "Mo-Gaan-Do, " refers to the lowest level of hell in Buddhism). Yan is tired of pretending to be an amoral gangster. Meanwhile, Ming yearns to become a cop for real. At one point, it becomes a cat-and-mouse game for each man to track down his undercover counterpart before his own identity is exposed. Driven by two great performances surrounded by solid supporting acts, "Infernal Affairs" is the rare testosterone movie that is also mature and thoughtful. This is a gripping, well-paced genre piece with an ending that isn't corrupted by a need to please audiences. Without a doubt, "Internal Affairs" is the best commercial movie from Hong Kong in a long while. Source: Andrew Sun, Hollywood Reporter.