A sophisticated twist on the love triangle 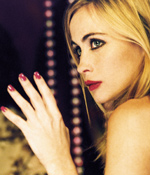 Three of France's finest and most popular actors engage in a sophisticated twist on the love triangle in this steamy story of middle-class marriage and infidelity. Catherine (Fanny Ardant), a Parisian gynecologist, feels there's something amiss in her marriage. She suspects that her husband, Bernard (Gerard Depardieu), has been cheating on her, becoming convinced when she discovers a woman's suggestive message on his cell phone. At first he denies everything, then tells her it doesn't mean a thing. Catherine seems to accept this but then has second thoughts. She wants to know what it's like for her husband to be with another woman. When she encounters Nathalie (Emmanuelle Beart), a prostitute, she decides to hire her to pose as a student and seduce her husband into an affair. Nathalie then must report back, in intimate, graphic detail, everything that goes on between them. As Nathalie carries out her unusual assignment, the curious relationship between the professional woman and the prostitute develops a dynamic all its own, becoming perhaps even more important to Catherine than her failing marriage. In a different way, Nathalie seduces Catherine as much as Bernard. Two generations of French actresses, and the interplay between them, pulls the audience into this fascinating psychological drama.