A prequel as good as its predecessor 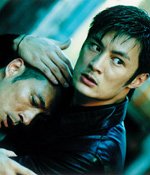 Once again Alan Mak and Andrew Lau have created a dizzyingly taut, darkly ambiguous thriller set in a cops-and-robbers underworld where everyone is either morally compromised, or dead, or both. While the trademarks of the first film are all present in 'Infernal Affairs 2', what the new film has to add is its status as a prequel, and the prevailing sense of doom that this status brings. 'Infernal Affairs 2' begins with the murder of a gangland kingpin and its aftermath, as criminals and police alike realign themselves in the ensuing struggle for control over Hong Kong's streets. The dead gangster's son Hau (Francis Ng), for all his softly spoken words and respectable appearance, turns out to be a ruthless successor to the triad empire, with a long-term plan to avenge his father and then shift the family into a more legitimate branch of political influence. Meanwhile young Ming (Edison Chen) is ordered to join the police as Sam's mole, and conversely Wong assigns Yan (Shawn Yue), a young police cadet who also happens to be Hau's half-brother, to infiltrate Hau's syndicate as an undercover operative. 'Infernal Affairs 2' sets itself explicitly in the period leading up to Hong Kong's 1997 shift from British to Chinese control. In consequence, as well as being an engrossing crime drama, 'Internal Affairs 2' also works undercover as a bold political allegory. Hollywood is already remaking Infernal Affairs (with Brad Pitt) - but I doubt that it could remake a sequel as complex and gripping as this. Source: Anton Bitel, Movie Gazette.