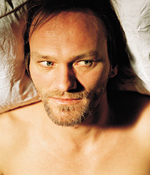 Film is, of course, a primarily visual medium. Many of the greatest filmmakers have used the natural world to convey emotions and create dramatic impacts that words never could. For some, nature itself almost becomes a character in their films. One thinks of John Ford's use of his majestic Western settings, or the magnificent desert expanses of David Lean's Lawrence of Arabia. The bleak, remote landscape of Iceland plays a similar role in Hilmar Oddsson's beautiful, well-acted drama. Oddsson himself says, "Nature plays a central role in...Cold Light." As it slowly transforms from the vivid and mild colors of summer and autumn to the cold blue light of winter and snow, we can almost see it as a protagonist in the story...The changing colors and the different faces of the natural landscape reflect the inner life of the community, where despair and hope are mirrored in the natural landscape. Cold Light tells the affecting story of Grimur, a man haunted by a tragic past that he thinks he could have prevented. The film moves back and forth between Grimur's initially happy childhood, and a 40-year-old Grimur living in Reykjavik and trying to come to terms with a catastrophe that changed everything. The young Grimur is played by the son of Ingvar Sigurdsson, who plays the adult Grimur.