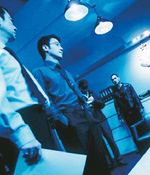 Returning for the final go-around are most of the original's cast, including Tony Leung ("Hard-Boiled") as doomed undercover cop Yan and Andy Lau ("Full-Time Killer") as crooked Triad mole turned good cop wannabe Ming. Eric Tsang also returns as Sam, the untrustworthy Triad boss. Leon Lai ("Heroic Duo") joins the cast as Leung, the boss of an elite squad, who has his own hidden agenda. Part 3's narrative structure is separated into two sections, one taking place 6 months before Yan's murder, and the other taking place 10 months after. The two sections intercut flawlessly. Ming comes to believe that he can redeem himself by exposing a killer in the police department that is going around offing the rest of Sam's undercover moles. Is Leung the killer? Ming thinks so, and sets to prove it. Meanwhile, we begin to notice that the increasingly erratic Ming seems to be losing his mind, and slowly but surely he's starting to fantasize himself as Yan. Source: Nix, Nixflix

Hong Kong/China, 2003, in Cantonese and Mandarin, Color, Not Rated