Power and Terror: Noam Chomsky in Our Times

Political philosopher speaks on 9/11 and the U.S. war on terror 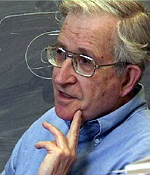 Chomsky at 73 is calm and quick-minded as ever. Chomsky himself hardly warrants a cult of personality -- uncharismatic and reserved, the man works hard at being merely the bearer of bad news. At the same time, despite his reputation as a massively endowed brainiac or "political philosopher," Chomsky rarely writes or says anything that requires a Ph.D. to grasp. Rather, he is a gimlet-eyed moralist with instant recall, to whom ethical ground, high and low, is earned by action, not rhetoric. His accumulation of cold facts results in an almost childishly simple perspective: The survival and growth of power, namely American, leads eventually to the bulldozing of innocent citizenry. American-born director John Junkerman keeps the proceedings determinedly no-frills. Comparing U.S. slaughter abroad to the Al Qaeda attacks, Chomsky simply asks us, "If one is right, why is the other wrong?" As he points out, the president's fave philosopher, Jesus, would've had to ask the same question. Source: Michael Atkinson, The Village Voice.

Power and Terror: Noam Chomsky in Our Times