Howard Zinn: You Can't Be Neutral on a Moving Train 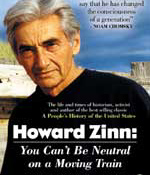 Howard Zinn is one of those intellectual icons who grab smart young people when they're already primed to adopt unconventional worldviews. Like Noam Chomsky, Zinn presents a clear moral vision that makes the compromises of modern society appear intolerable and reversible. When students and others encounter him for the first time—usually by reading his million-selling 1980 text A People's History Of The United States—they often get radicalized. Deb Ellis and Denis Mueller's documentary serves as an abridged version of both his life story and his political philosophy. It's mostly first-person, with Zinn describing his working-class upbringing, his service as a bomber in WWII, his years in the labor, civil-rights, and antiwar movements, and his long fight to make academia more activist. The filmmakers augment his talking-head interviews with file footage, Matt Damon-narrated passages from Zinn's essays, and testimonials from Zinn friends such as Chomsky, Tom Hayden, and Alice Walker. Source: Noel Murray, The Onion.

Howard Zinn: You Can't Be Neutral on a Moving Train