See the future of filmmaking 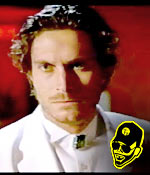 Industry professionals will be on hand to discuss High Definition and its impact on the future of filmmaking. Experience the clarity of high-def short films projected digitally in HD.