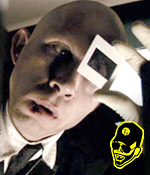 A paranoid murder suspect takes to filming himself round the clock to provide an alibi in case he's ever accused of another crime. When the police come calling, the one tape that can prove his innocence has mysteriously disappeared. Enjoy this High-def feature-length movie projected digitally in HD.